What was the Industrial Revolution?

The Industrial Revolution was the first major transformation of the world economy. There have actually been three industrial revolutions so far, with the last occurring with the advent of the internet in the 1990s. 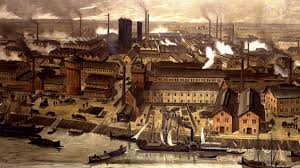 The dawn of the Industrial Revolution marked the beginning of the industrial age, a period when great advances in technology were made not only in Britain and the United States but all over the world. One of the biggest contributing factors to this was the advent of steam-powered machinery, which allowed massive scale production to take place without having to rely on inferior labour. Of course, machinery is still required today. For maintaining these machines, consider Industrial Valves from https://www.orseal.com/

The main industrial revolution that people imagine is the one that occurred in the 18th century and is known as the First Industrial Revolution. It marked a profound change in how things were produced, especially in areas such as textile production. Before the Industrial Revolution most of the textile production in England, the West Indies, and India took place at home. The textile industry of course became a very important economic sector, providing jobs to people throughout the region and giving some sense of economic advancement to those who laboured in it.

The Industrial Revolution did much more than improve production though. The availability of cheap, mass-produced goods led to an improvement in global economics that benefited everyone, not just the rich merchants of the time. Throughout much of the developed world poor health conditions and limited social mobility drove many people to seek out a better life elsewhere in the towns and cities. However, even those people who had families that didn’t live in villages or towns found the relative freedom provided by the Industrial Revolution to be both financially and socially beneficial.